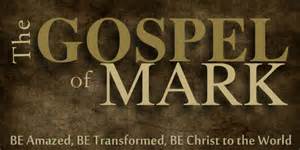 22 Then came one of the rulers of the synagogue, Ja’irus by name; and seeing him, he fell at his feet, 23 and besought him, saying, “My little daughter is at the point of death. Come and lay your hands on her, so that she may be made well, and live.” 24 And he went with him. And a great crowd followed him and thronged about him. 25 And there was a woman who had had a flow of blood for twelve years, 26 and who had suffered much under many physicians, and had spent all that she had, and was no better but rather grew worse. 27 She had heard the reports about Jesus, and came up behind him in the crowd and touched his garment. 28 For she said, “If I touch even his garments, I shall be made well.”29 And immediately the hemorrhage ceased; and she felt in her body that she was healed of her disease. 30 And Jesus, perceiving in himself that power had gone forth from him, immediately turned about in the crowd, and said, “Who touched my garments?” 31 And his disciples said to him, “You see the crowd pressing around you, and yet you say, `Who touched me?'” 32 And he looked around to see who had done it. 33 But the woman, knowing what had been done to her, came in fear and trembling and fell down before him, and told him the whole truth. 34 And he said to her, “Daughter, your faith has made you well; go in peace, and be healed of your disease.” 35 While he was still speaking, there came from the ruler’s house some who said, “Your daughter is dead. Why trouble the Teacher any further?”  36 But ignoring what they said, Jesus said to the ruler of the synagogue, “Do not fear, only believe.” 37 And he allowed no one to follow him except Peter and James and John the brother of James. 38 When they came to the house of the ruler of the synagogue, he saw a tumult, and people weeping and wailing loudly. 39 And when he had entered, he said to them, “Why do you make a tumult and weep? The child is not dead but sleeping.” 40 And they laughed at him. But he put them all outside, and took the child’s father and mother and those who were with him, and went in where the child was. 41 Taking her by the hand he said to her, “Tal’itha cu’mi”; which means, “Little girl, I say to you, arise.”42 And immediately the girl got up and walked (she was twelve years of age), and they were immediately overcome with amazement. 43 And he strictly charged them that no one should know this, and told them to give her something to eat.

Meditation: Do you approach the Lord with expectant faith? People in desperate or helpless circumstances were not disappointed when they sought Jesus out.  What drew them to Jesus?  Was it hope for a miracle or a word of comfort in their affliction?  What did the elderly woman who had suffered greatly for twelve years expect Jesus to do for her?  And what did a grieving father expect Jesus to do about his lost beloved daughter?  Jesus gave hope where there seemed to be no human cause for it because his hope was directed to God. He spoke words of hope to the woman (Take heart, daughter!) to ignite the spark of faith in her (your faith has made you well!). A 4th century church father, Ephrem the Syrian, comments on this miracle: “Glory to you, hidden Son of God, because your healing power is proclaimed through the hidden suffering of the afflicted woman.  Through this woman whom they could see, the witnesses were enabled to behold the divinity that cannot be seen. Through the Son’s own healing power his divinity became known.  Through the afflicted women’s being healed her faith was made manifest.  She caused him to be proclaimed, and indeed was honored with him.  For truth was being proclaimed together with hits heralds. If she was a witness to his divinity, he in turn was a witness to her faith. ..He saw through to her hidden faith, and gave her a visible healing.”

Jesus also gave divine hope to a father who had just lost a beloved child. It took considerable courage and risk for the ruler of a synagogue to openly go to Jesus and to invite the scorn of his neighbors and kin.  Even the hired mourners laughed at him in scorn.  Their grief was devoid of any hope. Nonetheless, Jesus took the girl by the hand and delivered her from the grasp of death. Peter Chrysologus, a 5th century church father comments on this miracle: “This man was a ruler of the synagogue, and versed in the law.  He had surely read that while God created all other things by his word, man had been created by the hand of God.  He trusted therefore in God that his daughter would be recreated, and restored to life by that same hand which, he knew, had created her. ..He who laid hands on her to form her from nothing, once more lays hands upon her to reform her from what had perished.”

In both instances we see Jesus’ personal concern for the needs of others and his readiness to heal and restore life.  In Jesus we see the infinite love of God extending to each and every individual as he gives freely and wholly of himself to each  person he meets.  Do you approach the Lord with confident expectation that he will hear your request and act?

“Lord, you love each of us individually with a unique and personal love.  Touch my life with your saving power, heal and restore me to fullness of life.  Help me to give wholly of myself in loving service to others.”