Polycarp was Bishop of Smyrna 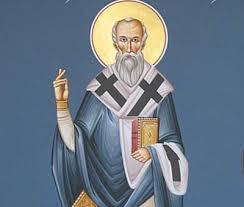 Polycarp was Bishop of Smyrna (today known as Izmir), a city on the west coast of Turkey. The letters to the “seven churches in Asia” at the beginning of the book of Revelation include a letter to the church in Smyrna, identifying it as a church undergoing persecution.

Polycarp is said to have known the Apostle John, and to have been instructed by him in the Christian faith. Polycarp, in his turn, was known to Irenaeus, who later became Bishop of Lyons in what is now France. We have (1) Irenaeus‘s brief memoir of Polycarp; (2) a letter to Polycarp from Ignatius of Antioch, written around 115 AD when Ignatius was passing through Turkey, being sent in chains to Rome to be put to death; (3) a letter from Polycarp to the church at Philippi, written at the same time; and (4) an account of the arrest, trial, conviction, and martyrdom of Polycarp, written after his death by one or more members of his congregation.

Polycarp was denounced to the government, arrested, and tried on the charge of being a Christian. When the proconsul urged him to save his life by cursing Christ, he replied: “Eighty-six years I have served him, and he never did me any wrong. How can I blaspheme my King who saved me?” The magistrate was reluctant to kill a a gentle old man, but he had no choice.

Polycarp was sentenced to be burned. As he waited for the fire to be lighted, he prayed:

The fire was then lit and shortly thereafter a soldier stabbed Polycarp to death by order of the magistrate. His friends gave his remains honorable burial, and wrote an account of his death to other churches. See the Penguin volume, Ancient Christian Writers.

O God, the maker of heaven and earth, who didst give to thy Venerable servant, the holy and gentle Polycarp, boldness to confess Jesus Christ as King and Saviour, and steadfastness to die for his faith: Give us grace, after his example, to share the cup of Christ and rise to eternal life; through Jesus Christ our Lord, who liveth and reigneth with thee and the Holy Spirit, one God, now and for ever.

O God, the maker of heaven and earth, who gave to your Venerable servant, the holy and gentle Polycarp, boldness to confess Jesus Christ as King and Saviour, and steadfastness to die for his faith: Give us grace, following his example, to share the cup of Christ and rise to eternal life; through Jesus Christ our Lord, who lives and reigns with you and the Holy Spirit, one God, now and for ever.

Unless otherwise indicated, this biographical sketch was written by James E. Kiefer and any comments about its content should be directed to him. The Biographical Sketches home page has more information.