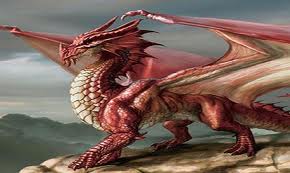 The Beast out of the Sea

1The dragona stood on the shore of the sea. And I saw a beast coming out of the sea. It had ten horns and seven heads, with ten crowns on its horns, and on each head a blasphemous name. 2The beast I saw resembled a leopard, but had feet like those of a bear and a mouth like that of a lion. The dragon gave the beast his power and his throne and great authority. 3One of the heads of the beast seemed to have had a fatal wound, but the fatal wound had been healed. The whole world was filled with wonder and followed the beast. 4People worshiped the dragon because he had given authority to the beast, and they also worshiped the beast and asked, “Who is like the beast? Who can wage war against it?”

5The beast was given a mouth to utter proud words and blasphemies and to exercise its authority for forty-two months. 6It opened its mouth to blaspheme God, and to slander his name and his dwelling place and those who live in heaven. 7It was given power to wage war against God’s holy people and to conquer them. And it was given authority over every tribe, people, language and nation. 8All inhabitants of the earth will worship the beast—all whose names have not been written in the Lamb’s book of life, the Lamb who was slain from the creation of the world.b

9Whoever has ears, let them hear.

10“If anyone is to go into captivity,

into captivity they will go.

If anyone is to be killedc with the sword,

with the sword they will be killed.”d

This calls for patient endurance and faithfulness on the part of God’s people.

The Beast out of the Earth

11Then I saw a second beast, coming out of the earth. It had two horns like a lamb, but it spoke like a dragon. 12It exercised all the authority of the first beast on its behalf, and made the earth and its inhabitants worship the first beast, whose fatal wound had been healed. 13And it performed great signs, even causing fire to come down from heaven to the earth in full view of the people. 14Because of the signs it was given power to perform on behalf of the first beast, it deceived the inhabitants of the earth. It ordered them to set up an image in honor of the beast who was wounded by the sword and yet lived. 15The second beast was given power to give breath to the image of the first beast, so that the image could speak and cause all who refused to worship the image to be killed. 16It also forced all people, great and small, rich and poor, free and slave, to receive a mark on their right hands or on their foreheads, 17so that they could not buy or sell unless they had the mark, which is the name of the beast or the number of its name.

18This calls for wisdom. Let the person who has insight calculate the number of the beast, for it is the number of a man.e That number is 666.

Footnotes:
a 1 Some manuscripts And I
b 8 Or written from the creation of the world in the book of life belonging to the Lamb who was slain
c 10 Some manuscripts anyone kills
d 10 Jer. 15:2
e 18 Or is humanity’s number

Using every tool reaching out to those who seek the shinning light Jesus Christ gives to those who have faith. Keeping uninformed aware of bable with truth and meaning
View all posts by brakeman1 →
This entry was posted in Discipleship and tagged 144 thousand, Angel, bible study, Book of revelation, fatal wound, God, Gods chosen people, Gospel of John, Gospel of Luke, Gospel of Mark, Gospel of Matthew, Jesus Christ, Lamb of God, New Testament. Bookmark the permalink.