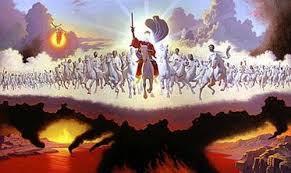 The Throne in Heaven

1After this I looked, and, behold, a door was opened in heaven: and the first voice which I heard was as it were of a trumpet talking with me; which said, Come up hither, and I will shew thee things which must be hereafter. 2And immediately I was in the spirit: and, behold, a throne was set in heaven, and one sat on the throne. 3And he that sat was to look upon like a jasper and a sardine stone: and there was a rainbow round about the throne, in sight like unto an emerald. 4And round about the throne were four and twenty seats: and upon the seats I saw four and twenty elders sitting, clothed in white raiment; and they had on their heads crowns of gold.

Worship of the Creator

5And out of the throne proceeded lightnings and thunderings and voices: and there were seven lamps of fire burning before the throne, which are the seven Spirits of God. 6And before the throne there was a sea of glass like unto crystal: and in the midst of the throne, and round about the throne, were four beasts full of eyes before and behind. 7And the first beast was like a lion, and the second beast like a calf, and the third beast had a face as a man, and the fourth beast waslike a flying eagle. 8And the four beasts had each of them six wings about him; and they were full of eyes within: and they rest not day and night, saying, Holy, holy, holy, Lord God Almighty, which was, and is, and is to come. 9And when those beasts give glory and honour and thanks to him that sat on the throne, who liveth for ever and ever, 10The four and twenty elders fall down before him that sat on the throne, and worship him that liveth for ever and ever, and cast their crowns before the throne, saying, 11Thou art worthy, O Lord, to receive glory and honour and power: for thou hast created all things, and for thy pleasure they are and were created.

Using every tool reaching out to those who seek the shinning light Jesus Christ gives to those who have faith. Keeping uninformed aware of bable with truth and meaning
View all posts by brakeman1 →
This entry was posted in Discipleship and tagged bible study, Book of revelation, God, Gospel of John, Gospel of Luke, Gospel of Mark, Gospel of Matthew, Jesus Christ, New Earth, New Heaven, The Throne. Bookmark the permalink.