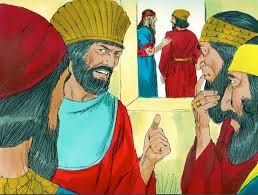 The Plot Against Daniel
Daniel 6:4-9

When anyone lives a righteous and godly life there will always be those who are offended. Paul states this in 2 Timothy 3:12 saying “Yea, and all that will live godly in Christ Jesus shall suffer persecution.” A life of godliness will stand in sharp contrast to the lives of those who live worldly lives. A worldly man will resent having his sins exposed and often will seek to silence or destroy that which exposes him. This was the case with Daniel. His godly character, and God’s blessings on his life, had elevated him to a position above all others in Babylon. His subordinates then hatched a plan to bring him down.

Jealousy is a the motive behind many evil works. We must understand that a godly man has little defense against such attacks. A righteous man’s actions can be predicted, because people know he will serve the Lord and will obey the Lord. It is easy to set a trap for an animal who has a set pattern of its life and travels specific routes. So it is for those who would destroy God’s man. Daniel’s character was of being unquestionably faithful to God. It was known he could not be persuaded to deny or be unfaithful to God. His enemies saw this as an opportunity to destroy him.

These satraps (Babylonian officials) apparently hated Daniel and wanted him removed from over them. We must understand that Daniel dealt with them all fairly and honestly and they had no valid reason to hate him except that he was a godly man.

All these presidents after coming up with their clever plan, take it to Darius. They hail him with great fanfare “King Darius, live forever!” Darius, probably thinks that they are coming representing Daniel also, because he is their chief. They cunningly used flattery to lay their trap. We have heard of the person who smiles to our face and sticks a knife in our back. That is a good description of what these evil men were doing.

They proposed there be made a decree that any man who asked any petition of any God or man for thirty days be cast into the lion’s den. These men hated Daniel, but could find no legitimate fault in him, so invented one.

Darius was the new king and it probably pleased him to see his subordinates wanting to honor him in such a way. This new decreed would promote Darius as being even above all the gods of the Babylonians, Medes and Persians. As supreme ruler, under this law, all men would recognize his superiority. So probably without thinking about the consequences of this decree Darius signed it and it became an irrevocable law.

Under Babylonian law, once the king made a decree, it was the law and even he could not withdraw it. Of course these plotting satraps knew this and knowing that once the king realized what had been done he would be obligated to carry out his orders.

When Daniel learned the decree had been signed it did not deter him from his daily routine of praying to God. As was his custom he knelt in front of his open windows that faced toward Jerusalem and three times each day prayed to God. Notice that Daniel’s prayer was one of thanksgiving to the Lord. Daniel lived 800 years before Christ, but he understood the principle that Jesus taught in Luke 12:4-5 “And I say unto you my friends, Be not afraid of them that kill the body, and after that have no more that they can do. But I will forewarn you whom ye shall fear: Fear him, which after he hath killed hath power to cast into hell; yea, I say unto you, Fear him.” Daniel was a man of faith. He lived the truth that Paul expressed to young Timothy, “For the which cause I also suffer these things: nevertheless I am not ashamed: for I know whom I have believed, and am persuaded that he is able to keep that which I have committed unto him against that day” (2 Tim. 1:12).

Those the brewed the plot against him assembled outside his window and waited until Daniel began to pray. At Daniel’s appointed time he appeared, knelt before the Lord and prayed as he always did. Confident in God’s grace Daniel prayed, knowing fully they he would be apprehended and would be thrown to the lions.

These schemers then hastened to tell the king, probably overjoyed that their carefully made plan had worked perfectly. Before the king that reminded him of the decree he had signed and that is was irrevocable. With the law established they then told the king that Daniel had broken this law and was seen praying to God, three times a day.

Using every tool reaching out to those who seek the shinning light Jesus Christ gives to those who have faith. Keeping uninformed aware of bable with truth and meaning
View all posts by brakeman1 →
This entry was posted in Discipleship and tagged Daniel, Daniel Daniel, King Darius, Prayer Daniel. Bookmark the permalink.