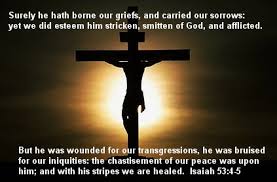 Visit this link for continuing scripture

Isaiah 53, I hope you enjoy reading this Book of Isaiah. But before we get right into Isaiah 53 let us give homage to our Lord and Savior Jesus Christ and after doing this we can read Book of Isaiah.

The Word Became Flesh The Deity of Jesus Christ

Colossians 1: 15 The Supremacy of the Son of God

15 The Son is the image of the invisible God, the firstborn over all creation. 16 For in him all things were created: things in heaven and on earth, visible and invisible, whether thrones or powers or rulers or authorities; all things have been created through him and for him.

[ Praise to God for a Living Hope ] Praise be to the God and Father of our Lord Jesus Christ! In his great mercy he has given us new birth into a living hope through the resurrection of Jesus Christ from the dead,

53 Who has believed what we’ve been saying?
Who has seen the Lord’s saving power?
2 His servant grew up like a tender young plant.
He grew like a root coming up out of dry ground.
He didn’t have any beauty or majesty that made us notice him.
There wasn’t anything special about the way he looked that drew us to him.
3 Men looked down on him. They didn’t accept him.
He knew all about sorrow and suffering.
He was like someone people turn their faces away from.
We looked down on him. We didn’t have any respect for him.

4 He suffered the things we should have suffered.
He took on himself the pain that should have been ours.
But we thought God was punishing him.
We thought God was wounding him and making him suffer.
5 But the servant was pierced because we had sinned.
He was crushed because we had done what was evil.
He was punished to make us whole again.
His wounds have healed us.
6 All of us are like sheep. We have wandered away from God.
All of us have turned to our own way.
And the Lord has placed on his servant
the sins of all of us.

7 He was beaten down and made to suffer.
But he didn’t open his mouth.
He was led away like a sheep to be killed.
Lambs are silent while their wool is being cut off.
In the same way, he didn’t open his mouth.
8 He was arrested and sentenced to death.
Then he was taken away.
He was cut off from this life.
He was punished for the sins of my people.
Who among those who were living at that time
could have understood those things?
9 He was given a grave with those who were evil.
But his body was buried in the tomb of a rich man.
He was killed even though he hadn’t harmed anyone.
And he had never lied to anyone.

10 The Lord says, “It was my plan to crush him
and cause him to suffer.
I made his life a guilt offering to pay for sin.
But he will see all of his children after him.
In fact, he will continue to live.
My plan will be brought about through him.
11 After he suffers, he will see the light that leads to life.
And he will be satisfied.
My godly servant will make many people godly
because of what he will accomplish.
He will be punished for their sins.
12 So I will give him a place of honor among those who are great.
He will be rewarded just like others who win the battle.
That is because he was willing to give his life as a sacrifice.
He was counted among those who had committed crimes.
He took the sins of many people on himself.
And he gave his life for those who had done what is wrong.”

Using every tool reaching out to those who seek the shinning light Jesus Christ gives to those who have faith. Keeping uninformed aware of bable with truth and meaning
View all posts by brakeman1 →
This entry was posted in Discipleship and tagged Book of Isaiah, Deity of Jesus Christ, Isaiah 53, Jesus Christ, lord jesus christ. Bookmark the permalink.