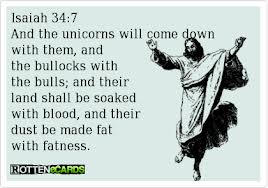 Welcome to Isaiah 34, I hope you enjoy reading this book. But before we get right into Isaiah 34  let us give homage to our Lord and savior Jesus Christ and after doing this we can read Book of Isaiah .

The Supremacy of the Son of God


15 The Son is the image of the invisible God, the firstborn over all creation. 16 For in him all things were created: things in heaven and on earth, visible and invisible, whether thrones or powers or rulers or authorities; all things have been created through him and for him.


[ Praise to God for a Living Hope ] Praise be to the God and Father of our Lord Jesus Christ! In his great mercy he has given us new birth into a living hope through the resurrection of Jesus Christ from the dead,

The Death of Jesus

The Lord Will Judge the Nations

34 Nations, come near and listen to me!
Pay attention to what I’m about to say.
Let the earth and everything in it listen.
Let the world and everything that comes out of it pay attention.
2 The Lord is angry with all of the nations.
His anger burns against all of their armies.
He will totally destroy them.
He will have them killed.
3 Those who are killed won’t be buried.
Their dead bodies will be thrown on the ground.
They will give off a very bad smell.
Their blood will cover the mountains.
4 All of the stars in the heavens will vanish.
The sky will be rolled up like a scroll.
All of the stars in the sky will fall like dried-up leaves from a vine.
They will drop like wrinkled figs from a fig tree.

5 The sword of the Lord will finish its deadly work in the sky.
Then it will come down to strike Edom.
He will totally destroy that nation.
6 His sword will be red with blood.
It will be covered with fat.
The blood will flow like the blood
of lambs and goats being sacrificed.
The fat will be like the fat
taken from the kidneys of rams.
That’s because the Lord will offer a sacrifice
in the city of Bozrah.
He will kill many people in Edom.
7 The people and their leaders will be killed
like wild oxen and young bulls.
Their land will be wet with their blood.
The dust will be covered with their fat.

8 That’s because the Lord has set aside a day to pay Edom back.
He has set aside a year to pay them back for what they did to the city of Zion.
9 The streams of Edom will be turned into tar.
Its dust will be turned into blazing sulfur.
Its land will become burning tar.
10 The fire will keep burning night and day.
It can’t be put out.
Its smoke will go up forever.
Edom will lie empty for all time to come.
No one will ever travel through it again.
11 The desert owl and screech owl will make it their home.
The great owl and the raven will build their nests there.
God will use his measuring line
to show how completely Edom will be destroyed.
He will use his plumb line
to show how empty Edom will become.
12 Edom’s nobles won’t have anything left there
that can be called a kingdom.
All of its princes will vanish.
13 Thorns will cover its forts.
Bushes and weeds will cover its safest places.
It will become a home for wild dogs.
It will become a place where owls live.
14 Desert creatures will meet with hyenas.
Wild goats will call out to each other.
Night creatures will also sleep there.
They will find places where they can rest.
15 Owls will make their nests and lay their eggs there.
And they will hatch them.
They will take care of their little ones
under the shadow of their wings.
Male and female falcons will also gather there.

16 Look in the scroll of the Lord. There you will read that

none of those animals will be missing.
Male and female alike will be there.
The Lord himself has commanded it.
And his Spirit will gather them together.
17 The Lord will decide what part of the land goes to each animal.
Then he will give each one its share.
It will belong to them forever.
And they will live there for all time to come.