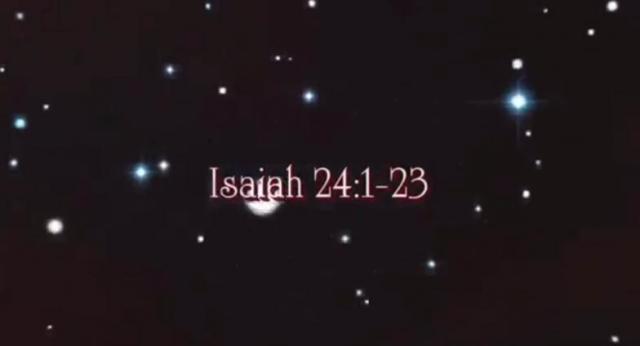 The Supremacy of the Son of God

15 The Son is the image of the invisible God, the firstborn over all creation. 16 For in him all things were created: things in heaven and on earth, visible and invisible, whether thrones or powers or rulers or authorities; all things have been created through him and for him.

[ Praise to God for a Living Hope ] Praise be to the God and Father of our Lord Jesus Christ! In his great mercy he has given us new birth into a living hope through the resurrection of Jesus Christ from the dead,

The Death of Jesus

The Lord Will Destroy the Earth

24 The Lord is going to completely destroy everything on earth.
He will twist its surface.
He’ll scatter those who live on it.
2 Priests and people alike will suffer.
So will masters and their servants.
And so will women and their female servants.
Sellers and buyers alike will suffer.
So will those who borrow and those who lend.
And so will those who owe money and those who lend it.
3 The earth will be completely destroyed.
Everything of value will be taken out of it.
That’s what the Lord has said.

4 The earth will dry up completely.
The world will dry up and waste away.
The most important people on earth will fade away.
5 The earth is polluted by its people.
They haven’t obeyed the laws of the Lord.
They haven’t done what he told them to do.
They’ve broken the covenant that will last forever.
6 So the Lord will send a curse on the earth.
Its people will pay for what they’ve done.
They will be burned up.
Very few of them will be left.
7 The vines and fresh wine will dry up completely.
Those who used to have a good time will groan.
8 The happy sounds of tambourines will be gone.
The noise of those who enjoy wild parties will stop.
The joyful music of harps will become silent.
9 People will no longer sing as they drink wine.
Beer will taste bitter to those who drink it.
10 Destroyed cities will lie empty.
People will lock themselves inside their houses.
11 In the streets people will cry out for wine.
All joy will turn into sadness.
All happiness will be driven out of the earth.
12 All of the buildings will be knocked down.
Every city gate will be smashed to pieces.
13 That’s how it will be on the earth.
And that’s how it will be among the nations.
It will be as when workers knock all but a few olives off the trees.
It will be like a vine that has only a few grapes left after the harvest.

14 Those who are left alive will shout with joy.
People from the west will praise the Lord because he is the King.
15 So give glory to him, you who live in the east.
Honor the name of the Lord, you who are in the islands of the sea.
He is the God of Israel.
16 From one end of the earth to the other we hear singing.
People are saying,
“Give glory to the One who always does what is right.”

But I said, “I feel very bad.
I’m getting weaker and weaker.
How terrible it is for me!
People turn against one another.
They can’t be trusted.
So they turn against each other.”
17 People of the earth,
terror, a pit and a trap are waiting for you.
18 Anyone who runs away from the terror
will fall into the pit.
Anyone who climbs out of the pit
will be caught in the trap.

The Lord will open the windows of the skies.
He will flood the land.
The foundations of the earth will shake.
19 The earth will be broken up.
It will split open.
It will be shaken to pieces.
20 The earth will be unsteady like someone who is drunk.
It will sway like a tent in the wind.
Its sin will weigh so heavily on it that it will fall.
It will never get up again.

21 At that time the Lord will punish
the spiritual forces of evil in the heavens above.
He will also punish the kings on the earth below.
22 They will be brought together
like prisoners in chains.
They’ll be locked up in prison.
After many days the Lord will punish them.
23 The Lord who rules over all will rule
on Mount Zion in Jerusalem.
The elders of the city will be there.
They will see his glory.
His rule will be so glorious that the sun and moon
will be too ashamed to shine.