v1 An *angel gave me a stick that was like a pole. He said, ‘Go. You must measure the *temple of God. Measure the *altar and count those who *worship there. v2 Do not measure the area that is outside the *temple. That area belongs to the nations. And the nations will destroy the holy city for 42 months.’

Verse 1 An *angel gave John a stick that he could use to measure. It was like the ruler that an architect uses to measure land. The *angel told John to measure the *temple and the *altar. John had to count those who *worship in the *temple. God would protect the area that John was measuring.

Verse 2 The outer area of the *temple was for the nations. The nations were those who did not *worship God. They will have control of the outer area. And they will control Jerusalem (called the ‘holy city’) for 42 months. For that time, God would allow them to do this. He would not protect the city or the outer area.

The rule of the nations over Jerusalem lasts for 42 months. At the end of that period, they will not rule Jerusalem. Daniel speaks about a 7-year period (Daniel 9:27). These 42 months are the second half of that 7-year period. After the end of this time the *Lord Jesus will come. He will rescue the city and he will rule over it. 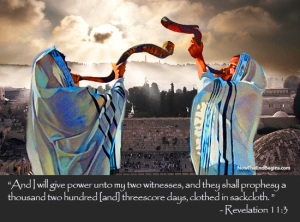 v3 ‘I will send my two witnesses. They will *prophesy for 1260 days. They will wear rough clothes like those who are sad.’ v4 These two witnesses are the meaning of the two *olive trees and the two lamp holders. These objects stand in front of the *Lord who rules the earth. v5 If anyone tries to hurt the two witnesses, fire comes from their mouths. And the fire will kill their enemies. Anyone who tries to hurt them will die in this way. v6 These witnesses have the power to shut up the skies. No rain can fall during the days that they *prophesy. They can turn water into blood. They have power to send every kind of trouble to the earth as often as they want.

v7 They will finish their message. Then the evil *beast will come up from the hole whose depth has no end. He will fight against the two witnesses. He will overcome them and he will kill them. v8 Their dead bodies will lie in the street of the great city. This city has the name Sodom and Egypt, which has a *spiritual meaning. This is the place where their *Lord died on the cross. v9 For three and a half days, people will stare at the bodies. The people are from all nations, *tribes, and languages. They will not allow anyone to bury the bodies in graves. v10 The people will be happy because of the death of the two witnesses. The people will enjoy themselves and they will send gifts to each other. They will behave in this manner because the two *prophets caused so much trouble for them. And the trouble upset all those who live on the earth.

v11 After three and a half days, the breath of life from God came into the two witnesses. They stood on their feet. All who saw them were very afraid. v12 The two witnesses then heard a loud voice from heaven. It said, ‘Come up here.’ They went up to heaven in a cloud while their enemies watched them.

v13 At that same hour, there was a great *earthquake. It destroyed a tenth (10th) of the city and it killed 7000 people. Those who did not die were very afraid. They gave *glory to the God of heaven.

v14 The second trouble has passed. The third trouble is coming very soon.

These two men will wear rough clothes. This is to show that they are serious. What they have to say is important. They tell about God’s anger against the *sins of the people.

In *prophecy, a month is 30 days. The 1260 days here are the same period as the 42 months in verse 2. They are the last half of the 7-year period before Jesus comes.

Verse 4 Zechariah saw two *olive trees and a lamp holder (Zechariah 4:1-7). Zechariah asked an *angel what these meant. In his reply, this is what the *angel said. ‘Not by force, nor by power, but by my Spirit, says the *Lord of armies.’

The *olive trees provide the oil for the lamps. The oil burns in the lamps in order to give light. So, God has given the power of his Spirit to work by these two men.

Verses 5-6 These two verses show the strange power that these men had. Many people wanted to hurt them but none could. Those who tried died. Fire came from the mouths of the two men. Elijah had called down fire from heaven to kill two bands of soldiers (2 Kings 1:10-12).

Like Elijah, these men could stop the rain (1 Kings 17:1). They did this for the period of 42 months. Like Moses, they could turn water into blood (Exodus 7:14-18). God had given to them more power than he gave to any of the *prophets. They could use this power as often as they wanted. They had the power to hurt people and to cause damage on the earth.

Verse 7 These two men finished the task that God gave to them. Then the evil *beast came up from the deep hole (see 9:1-11). This *beast may mean *Satan. He fought against them and he killed them.

Verse 8 The two men had worked in the city called Jerusalem. It was there that the *Lord Jesus died. When *Satan killed the two men, their bodies remained in the street.

Sodom was a very evil place. Egypt was the place where God’s people were slaves. So, the great city had become like Sodom and Egypt.

Verse 9 The bodies were in the street for three and a half days. Crowds of people came to see them. People came from all over the world. Nobody could remove the bodies to bury them.

Verse 10 The people had been afraid of the two men. They did not like what these men had said. What they had done caused so much trouble.

Now the men were dead. News of their death went all round the earth. The news made the people happy. They had parties and they sent presents to each other.

Verse 11 The people were only happy for a short time. After three and a half days, God raised the two men from death. He breathed new life into them. They stood up on their feet. All who saw it were afraid.

Verse 12 A loud voice from heaven called to the two witnesses. ‘Come up here’, the voice said. The two men rose up from the ground. They disappeared from view in a cloud. And they went up to heaven.

Their enemies saw this happen. They had been happy but now they were afraid. They saw the men come alive again. They saw them go up into heaven.

Verse 13 The two witnesses went up to heaven. At the same time, there was a great *earthquake. A tenth (10th) part of the city called Jerusalem fell. As a result 7000 people died.

There was a connection between the *earthquake and the two men as they went up to heaven. By this God showed that they were his servants. He had sent them and he rescued them. The people could see that this was so. They knew that both events showed the power of God. They had to give *glory to God.

Verse 14 The second of three times of trouble had ended. The third and last one would come soon.

Using every tool reaching out to those who seek the shinning light Jesus Christ gives to those who have faith. Keeping uninformed aware of bable with truth and meaning
View all posts by brakeman1 →
This entry was posted in Discipleship and tagged Christ, Christ Jesus, Jesus Christ, John, Lord, Luke, Matthew, New Testament, theology. Bookmark the permalink.